The "Don't Protect Yourself or Others Bill"

The Maryland General Assembly is back in session, with a new Democrat Governor at the helm, and a majority democrat-controlled legislature, they see ‘clear sailing’ ahead.  In fact, the first bill put into the hopper, is Senate Bill 1, by Senator Waldstreicher.  This bill would:

Why should you care?  At a time, where “we” are “reimagining policing,’ “defunding police’ and watching increasing crime in Montgomery County, which our own Police Chief, Marcus Jones characterized as a ‘disturbing trend,’ the Senator’s bill seeks to deprive and continually erode the rights of law abiding citizens of their Constitutional right to keep and bear arms.

In a world that is becoming increasingly dangerous, I am reminded of the words from Washington, D.C’s former Chief of Police, Cathy Lanier, when in a situation involving a gunman “ "Your options are to run, hide, or fight," said Lanier. "If you're in a position to try and take the gunman down, to take the gunman out, it's the best option for saving lives before police can get there," she told Anderson Cooper.  It will be at least 8 minutes once the police are called.  Hmmmm and that was in 2015?  I wonder about the 2023 time frame for police response?

What can you do?  For starters, you can send an email to Senator Waldstreicher, who is Vice Chair of the Senate Judicial Proceedings Committee. and the rest of the committee who will be hearing this legislation on Tuesday February 7th @1:00 pm.    If that is too much, then send an email, make a call to Chairman Will Smith’s Judicial Proceedings office at 410-841-3623.

If Senators Waldstreicher, Smith and the rest of the committee does not hear from their constituents, they either think we agree with them, or that we do not care.  We cannot allow for the continued erosion of our Bill of Rights, especially at the hands of a party that seems bent on sacrificing our ability to protect ourselves.

S. Alexandra Tuttle is a Member of the Maryland Republican Central Committee for Montgomery County. 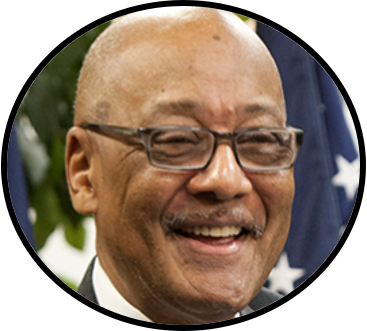 Each month we feature a prominent Montgomery County resident engaged in advancing Conservative ideals.  We commemorate Black History month by showcasing Silver Spring resident and civil rights activist, Robert L. Woodson, Sr. and the work of his Center for Neighborhood Enterprise, renamed the Woodson Center in 2020.

He takes on The 1619 Project and Critical Race Theory in his book Red, White, and Black: Rescuing American History from Revisionists and Race Hustlers, essays by black scholars and writers who tell how blacks built a hundred colleges, their own medical schools, hotels, railroads and banking systems when doors were closed to them. There are stories about 20 former slaves who became millionaires. “These accomplishments were made possible by a set of values cherished among the Blacks of the time: self-determination, resiliency, personal virtue, honesty, honor and accountability,” Woodson wrote in The Wall Street Journal.

To promote virtues of character and honor and to equip students to take charge of their futures, the Woodson Center has developed the 1776 Unites curriculum showcasing blacks who have prospered by embracing America’s founding ideals. The K-12 curriculum has received high marks from the Johns Hopkins Institute for Education Policy and can be used to supplement history, civics, English and social/emotional learning topics. Free to all it can be downloaded HERE>

We kick off 2023 with a new feature focusing each month on a prominent Montgomery County resident engaged in advancing Conservative ideals. We begin with William J. Bennett, a Chevy Chase resident and Gonzaga High School graduate, who is one of the nation's most influential and respected voices on cultural, political, and educational issues. He served as Secretary of Education and Chairman of the National Endowment for the Humanities under President Reagan and as the first Drug Czar under President George H.W.Bush.

Bennett is well known for his successful anthology of stories, The Book of Virtues, which he, and his wife Elayne, have reissued with an 30th Anniversary edition.

AEI's Senior Fellow Robert Pondiscio puts it in perspective in his Op-Ed that appeared in City Journal. READ THE ARTICLE HERE>

Ann Guthrie Hingston is a Member of the Maryland Republican Central Committee from Montgomery County.

What do Dr. Martin Luther King, Jr. and Kevin McCarthy have in common? During a seemingly futile battle for Speaker of the House, McCarthy displayed winning characteristics that likewise guided Dr. King: courage, self-confidence, solid determination, plus a willingness to work with allies and, if necessary, one’s opponents to get the job done.

What also recently set McCarthy apart was a badly needed display of humility – something barely existent in today’s hard-core partisan politics. This comes at a particularly crucial time where the seemingly moribund American Dream is concerned. Republicans are now better poised to protect and defend it.

Though the public display of holding his feet to the fire felt scorching to all of us, it actually yielded some truly positive results – most notably greater legislative and financial accountability. No more last minute “You’ll have to read it to see what’s in it” Omnibus Bills that mostly serve as the Democrat’s ATM card – essentially and endlessly swiping away at our personal financial security. Bills hitting the floor must come from and be germane to the respective committees from which they originated. This clearly lends to greater transparency, more focused legislation and, best of all, genuine debate. Those bills will have to be voted on separately as opposed to the “anything goes and everyone else pays” Omnibus monstrosities generated by Nancy Pelosi and company; bills that got rolled out in the dark of night with a mandate to be voted on by dawn two days later.

Proxy voting is now eliminated – Representatives will actually have to show up and do their jobs again. The compromises McCarthy accepted on his path to becoming Speaker offer a renewed, sound approach to legislating. These changes will also help to diminish the overreaching effects of the Administrative State, something that’s grown with inexorable audacity under Democrat control and cost American taxpayers and businesses ungodly sums in burdensome taxes.

To his credit, Kevin McCarthy displayed humility by listening to his critics. He endured some truly hard hits but never gave up. He knows that it takes a team to accomplish great feats, and he demonstrated an ability to bring together disparate, forceful groups in his willingness to take on the often thankless, but highly critical job as Speaker of the House. In essence, he showed he has what it takes to be an effective leader under the toughest of circumstances.

On this day, as we reflect and give thanks to the esteemed Dr. King for his timeless example of unflappable leadership, we should likewise give a quiet nod to all the brave souls who are willing to get in there and fight the good fight against seemingly insurmountable odds

Stacey Sauter is a Republican former candidate for the Maryland House of Delegates, a REALTOR and member of the Montgomery County Republican Party Communications Committee. She can be reached at [email protected]