We Support the Sitting Judges

By former Chairman Alexander A. Bush

Most of us spend little time, if any, thinking about judicial elections. The candidates rarely campaign and the judges appointed by the Governor almost invariably win.

This year could be a tragic exception. For the first time in living memory an unvetted candidate has won the Democratic primary

in Montgomery County and earned a spot on the November general election ballot to become a Circuit Court Judge for the next fifteen years.

Back in February I wrote about two of the four “sitting judges” who are supported by Governor Hogan. I include that article again below. But since then the situation has become much more dire. I focused last time on why you should vote for the sitting judges. But this time, we need to talk about why you should vote against their opponent, Marylin Pierre, regardless of your political affiliation.

First, Mrs. Pierre has been determined to be unqualified numerous times by her (mostly Democratic) peers.

Between 2012 and 2017, Ms. Pierre applied for 14 different judicial vacancies in Montgomery County. Her applications were vetted and reviewed by Trial Courts Nominating Commissions appointed by a Democrat (Governor O’Malley) and by a Republican (Governor Hogan). She was rejected by Gov. O’Malley’s Commissions 8 times, and by Gov. Hogan’s Commissions 6 times. Having been rejected for 14 positions, she no longer applies.

Second, Mrs. Pierre has shown that she is willing to say anything to win, betraying her lack of any real underlying principles.

On June 1, 2020, Ms. Pierre tweeted: “As for the others 3 [Minneapolis] officers, ‘Lock em up’ and then the burden is on them to prove that they are not guilty of ‘contributory negligence and involuntary manslaughter.’ ‘Cops are not immune’ from arrests.”

And on May 30, 2020, Mrs. Pierre tweeted her criticism of the sitting judges for not commenting on social media about the George Floyd case.

Is Mrs. Pierre unaware that the rules governing judicial conduct in Maryland specifically prohibits judges from commenting on pending or impending cases in any court? Or was she cynically taking advantage of the rules? Either way, it’s not good.

you might be asking yourself why I said no one, regardless of political affiliation, should vote for Mrs. Pierre. Surely there are some who agree with the views she has expressed.

But here is why anyone, and I mean anyone, should vote against her.

For a judicial candidate to get their name on the November General Election ballot, they must win in either the Republican or Democratic Primary election. Historically, insurgent candidates have focused on trying to win in the Republican Primary, because our primary has only about 15% as many voters as the Democratic Primary. It’s simple math: the campaigning necessary to win among 12,000 Republicans is a lot easier than the campaigning necessary to convince 75,000 Democrats.

And in 2018, that is exactly what Marylin Pierre attempted to do.

In January that year, Mrs. Pierre and her treasurer came to our candidate training event and assured those running the event that she would be a strongly conservative judge and asked for the party’s support in the 2018 Primary. Mrs. Pierre came to one of our fundraising dinners in early February to ask for our votes again, as campaign finance records will show. And later that month she came to our yearly convention, and proudly posed for a photo with the current county chairwoman for the Trump for President Campaign. 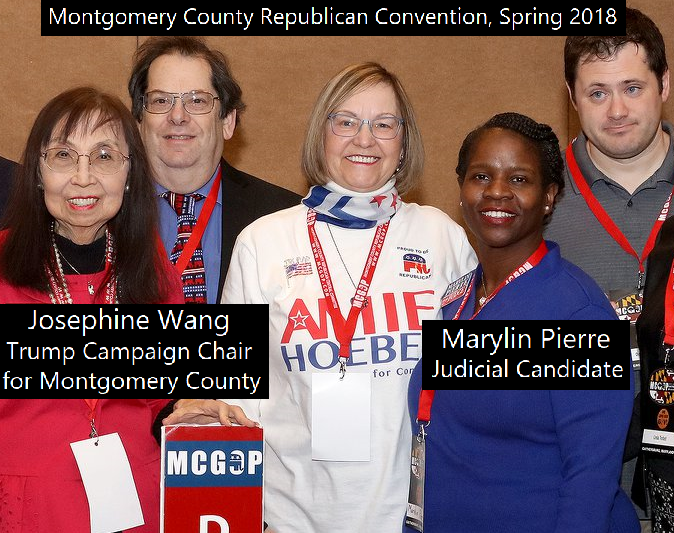 Mrs. Pierre lost in both parties’ primaries in 2018. In fact, she did worse in the Republican Primary. Obviously, she has decided to change her strategy, and has remade herself into whatever she thinks will help her win.

If this doesn’t convince you, regardless of your political views, not to vote for Marylin Pierre, then nothing will. 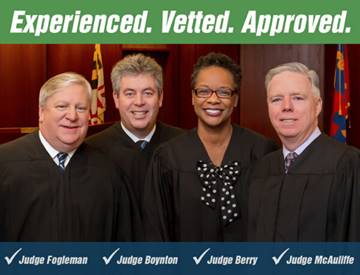 A few days ago, I had the opportunity to speak with two Montgomery County Judges – both recently appointed by Governor Hogan – who are up for election in 2020. During a Presidential Election year, it can be easy to forget how critical these local, nonpartisan elections are.  And as a practicing attorney, I’ve seen enough to know what makes a good judge and what doesn’t. A good judge is experienced, and shows respect to the people who appear before them. Also, a good judge doesn’t need to be a judge to feel respected or successful, but already brings success and respect to the bench with them.

Judge Bibi Berry has been practicing family law for nineteen years, since graduating from Georgetown in 2001, and was most recently an equity shareholder at Paley Rothman.

Judge Michael McAuliffe (also a Georgetown Alum) has been practicing law for thirty-two years and was most recently a partner at with the firm of Ethridge, Quinn, Kemp, McAuliffe, Rowan & Hartinger.

Judge McAuliffe told me that he has tried nearly every kind of case, and has represented individuals, small businesses, and some large businesses. But he can still recognize that the most important thing is to treat everyone as an individual and every case as its own. “I will never assume that I have tried so many cases that I know your case before hearing it,” he told me.

Judge Berry previously served as Family Division Magistrate for the Circuit Court for Montgomery County starting in 2017. She told me that many of the people who appear before her are unrepresented, and she has learned how to build trust with people who are unfamiliar with the system. Simple things, she said, like making sure there is fresh ice water for the parties or by remembering litigants’ names, shows that she respects and values them as individuals.

Judge McAuliffe told me some of his family’s story. His grandfather came to the United States from a dirt-poor part of County Kerry in Ireland, worked hard and was able to send his son to college. Part of Judge McAuliffe’s motivation in seeking the nomination was a desire to give back the country that has given him and his family so much opportunity.

Both Judges agreed that one of the most critical traits of a good Judge is timeliness. I can personally vouch for this. When a Judge takes the bench 40 minutes late, people in the courtroom seem notably less respectful than when a judge is on time. Like many other situations, the culture of a courtroom comes from the top, and when a judge shows people that he respects them and their time, the judge receives more respect in return. So important is this to Judge Berry that she was able to recall the most minute details of the two occasions (in three years as a Magistrate) that traffic accidents caused her to be late.

Something else I like about Judge Berry is that she brings a diversity of experience to the bench. Unlike most judges, Judge Berry started her career as a paralegal and took evening classes to earn her law degree, all while raising her daughter on her own. It is uncommon, but highly beneficial, for a judge to understand the practical realities of juggling childcare, work, and everything else.

Lastly, both Judges gave me the same answer to my question about what aspect of being a judge they find most challenging. Custody decisions, they said, are the most challenging because of the enormous responsibility of making momentous decisions for an innocent child. To me, there is no more important trait for a Judge than to be aware of the awesome power that they have, and the long-lasting impact their decisions can have on others.

In all, Governor Hogan has appointed (or re-appointed) four Judges who will be on the ballot in the primary election. I strongly urge you to support them on April 28th.

Alexander Bush is a practicing attorney at Rowe Weinstein & Sohn PLLC in Rockville, where he litigates throughout Maryland, D.C., and Virginia, and supervises a half dozen employees. He's also a Member and former Chair of the Montgomery County Republican Central Committee.