By Pat Fenati Candidate for Maryland House of Delegates, District 14

What does At-Large representation mean for the voters of this county? In District 14 where I live, the current state delegates, who are also the Democrat candidates for 2018, all live in the more southern precincts of the district. These delegates do not think it is important to spend much time in the up-county area. Since the votes in the more densely populated southern precinct are taken for granted, the constituents in the more rural up-county precincts are largely ignored.

The red dots on the District 14 map to the left show where the current District 14 delegates live. Those delegates are also the 2018 Democrat candidates. It is obvious from this map that there is currently no one representing the northern precincts in our district. The Republican slate in contrast has two delegate candidates in the up-county area and one in Burtonsville. Our Senate candidate also lives in the southernmost area of the district. Our slate covers the district and promises to listen to all constituents in the district.

This current lack of representation happens easily because we are forced to run at-large. In all Montgomery County state districts, three Democrat candidates run for office against three Republican candidates, rather than dividing the Senate district into three different delegate districts. Dividing the district into three single-member districts, would assure that citizens in the up-county area would have a voice in Annapolis, and the delegates would have to be more attentive to the issues in their own areas in order to retain their seats in upcoming elections. Single-member districts must be considered as an important issue in any redistricting reform.

In 2016, the county voted overwhelmingly for term limits for the County Council. The only way we can limit the terms of state delegates is to vote them out. 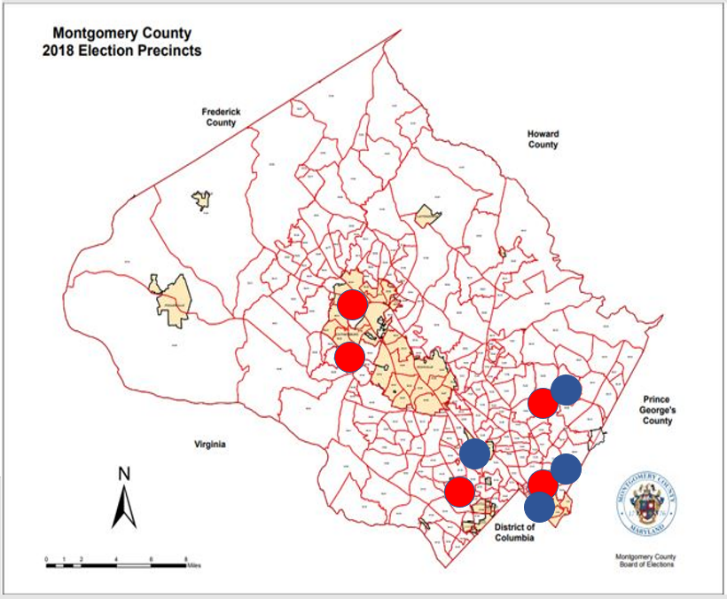 On the county map to the left, the red dots approximate the residences of the Democrat nominees for County Council for the five County Council districts. The blue dots show where the Democrat At-Large primary winners reside. Almost all the Democrat nominees are clustered in one section of the county. Have they ever been on 270 during rush hour?  Do they understand the problems of overdevelopment of farmlands without proper roads and other county services? Do they understand how overdevelopment changes  the way of life for rural communities?

Let’s look at it another way.

If the current nominees are all elected, there will be not one council member living in any northern precinct or precincts on the east side of the county. That means that no one will be speaking for north county voters in the county or the state, since the council members would live in such a compact area of the county!

This brings to mind a question that needs attention:

Why do we need At-Large representatives at either the state or county level? At the state level, each district has one senator who represents the entire district. For the county, the County Executive should be aware of county-wide problems and bring them to the attention of the council.

In the state, we need single member districts, and in county government, we need nine council members elected by voters from nine smaller regions so that elected officials can live closer to their constituents and react more efficiently to their concerns.

We must use common sense and work with the citizens of the entire county. The overwhelming support for the term limits proposition in 2016 should make the County Council and even the state government aware that the citizens of this county are looking for more fair representation.