When my wife and I were married almost 27 years ago, our marriage was still illegal in two states. We were a mixed-race couple for 27 years until her death in May 2022.

On the day of our marriage, I was confident we’d have race relations figured out as a country by the time my kids reached adulthood. But we haven’t. My son is now 21 and, truth is, the situation – at least the perception of the situation – is MUCH worse than I would have imagined.

And concepts like Critical Race Theory (CRT) are much of the cause.

Which is why I’m proud to have the endorsement of UARE – United Against Racism in Education.

UARE is leading the battle against Critical Race Theory (CRT) – the misguided belief that your race is the primary factor that determines one’s identity AND that race determines whether one is a success or a failure in America.

CRT also holds that the United States was — and is — systemically racist — holding back non-White individuals to preserve power for Whites. The remedy for systemic racism, according to CRT, is for the oppressors to recognize their inherent privilege, and subordinate themselves to the oppressors; and for the oppressors to demand what is rightfully theirs (Kendi: How to be an Antiracist).

As it turns out, the “theory” underpinning Critical Race Theory is both incorrect and unnecessarily divisive. 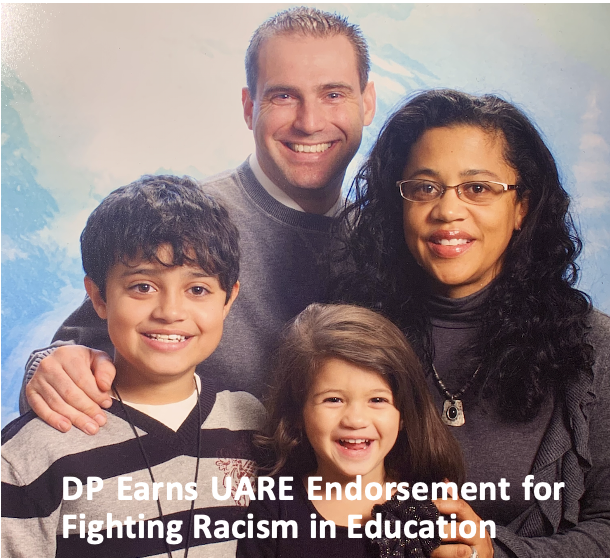 ​First, CRT is incorrect. Though race was a significant factor in determining one’s success in America until the 1950s, and there were many laws in place that made the US systemically racist until the 1960s, the 1964 and 1968 Civil Rights Acts, as well as the 1965 Voting Rights Acts, coupled with a series of historic US Supreme Court Cases (Brown v. Board, Bailey v. Patterson, Loving v. Virginia), changed the system.

(Today, marriage / non-marriage is a much more significant determinant of poverty in America than is race, as single female heads of household suffer from a 23.4% poverty rate, while married couples are only at 4.7% (US Census Bureau). Stated differently, growing up in a two-parent family is much more important to the success of a child than is the color of your skin.)

The second problem with CRT is that it is inherently divisive. It divides friends, it divides families and it draws lines between communities where they otherwise would not be. It teaches hatred and resentment of others based on the color of their skin (racism); it creates more hatred and resentment as one race is favored of another to “fix racism”; and, it fails to recognize that individual traits like hard work and grit play a significant role in determining whether one is successful in America.

At the same time that Critical Race Theory is untrue and culturally divisive, America is an increasingly integrated society. As of 2020, mixed-race couples represent 20% of all new marriages (Pew Research Center), while 94% of Americans approve of interracial marriage. (Axios).

Positions of leadership are also increasingly integrated. More Non-Whites occupy the corridors of power in Congress, where 23% of members are now non-White – up from 0% in 1950 (Pew Research), while nearly 30% of management positions in the US are occupied by non-Whites, up from 25% in 2010 (Zippia, BLS). Combined, all of these statistics tell us the US is anything BUT systemically and culturally racist.

As a parent of two mixed-race children who maintains friendships with many mixed-race families, I think it’s time we stop sewing the seeds of hatred for our children and burdening them with our problems. Instead, we need to free them from our past so they can work together as citizens, as friends, and as family members, to help each other succeed, irrespective of race.

Because America is at its best when are all working together, solving problems together, and overcoming obstacles together to achieve the American dream. That can only happen if we cast aside dated and inaccurate theories like CRT.

Thank you, UARE for helping to lead the fight against racism in education, laying the foundation for greater racial harmony in Maryland and in America.

I am proud to join you in the fight.