Imagine being a young girl with knowledge of only your birthplace.  Then, one day, your parents announced the family was going to move to the United States to escape from Communist China.  The trip across the ocean on the ocean liner, President Cleveland was very exciting, and one of Josephine’s favorite memories. 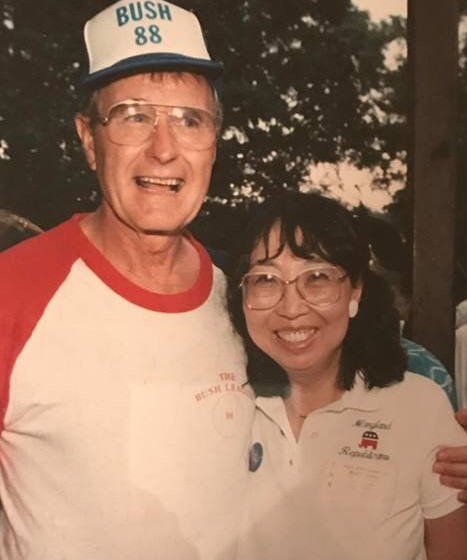 The Chang family, Josephine, Mother, Father and four brothers, landed in San Francisco and settled in Flushing, New York in 1959.   Jack the cat was an important part of the family succeeded by other feline members.

When Josephine became a Naturalized Citizen and was asked by the judge if she wanted to change her Chinese name, she was reading “Little Women” by Lois May Alcott, so she added Josephine to her Chinese name, becoming legally, Josephine Jung-Shang Chang.  She received, a letter of acceptance to enter Queens College ( City University of New York) as a 4-year degree student, a memorable event in her life.  She received her MA degree from George Washington University in 1969 and a Senior TAFT Fellow from Catholic University in 1990.

President Eisenhower’s policy to help intellectual refugees from China was responsible for her interest in politics.  She and her family were Republicans before even arriving in America.  Volunteering to address letters at the White House ignited her political interest.

Josephine came to Maryland due to her husband’s job with the Navy at David Taylor Model Basin.  They had a son and a daughter, and she has 4 grandsons.

She worked at Montgomery College as a part-time faculty mentor, and then with her Master’s Degree in Education from GW University became a teacher with the Montgomery County Public Schools teaching Child Development and COBOL, one of the early computer programming languages.  In 1988, Josephine was named Outstanding Maryland Teacher by the White House and Outstanding Employee of MCPS.  She also was awarded a Sr. Taft Fellowship. 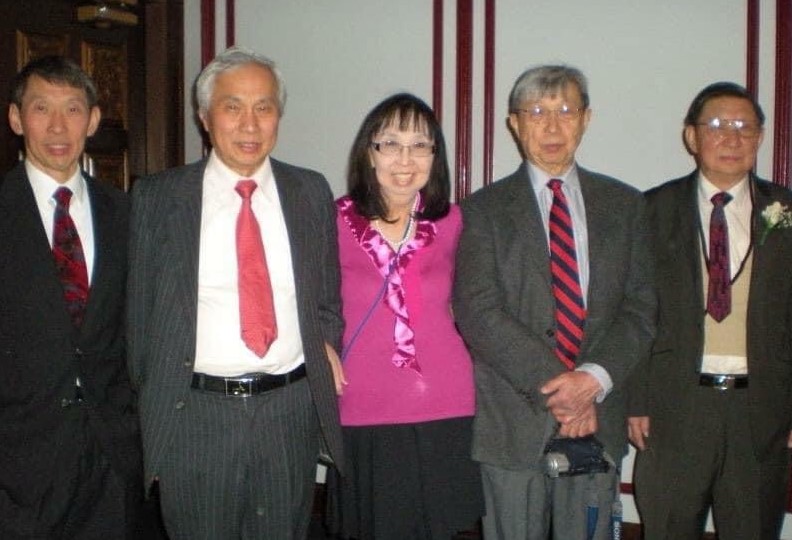 Her generosity contributed to the establishment of Republican Headquarters in Montgomery County, and her office there was the location of the newly decorated and furnished technical communications studio. She has also served as a Delegate to Republican state and national Conventions.  She has been a vital Central Committee member for a total of 30 years.

Josephine’s closet displays a fascinating collection of shoe fashion history!  As a friend, I doubt ‘retire’ is a word in her future.  Josie is one of the hardest-working, energetic and loyal people I know.

Josephine’s recreational interests are calligraphy, origami, classical music and music from the sixties such as the Beatles; Andy Williams and sometimes Irish music as well.  She says, “I have enjoyed living here in Maryland most of my life as I raised a family, had a teaching career and am now looking for a place to retire -  probably right here in Maryland.”

Debby Lambert was born in Greenwich, Connecticut, and in 2000 moved to Montgomery County from McLean, Virginia, which had been her home for over 30 years. Besides raising two sons there, she did a lot of freelance writing, focusing on personality profiles, human interest stories, and investigative reporting.

During the 1980s, Debby also co-founded The Virginia Republican Forum, whose members were fortunate to enjoy hearing prominent speakers such as M. Stanton Evans, Dr. Walter Williams and Morton Blackwell. She was also a member of the Fairfax County Republican Committee and served as press secretary for Delegate Gwen Cody.

Debby’s rich career also includes more than 30 years of working for Accuracy in Media (AIM), starting in 1983. This was America’s first media watchdog organization, launched by Reed Irvine, Don Irvine’s father, who bravely stood up and exposed all the Big Media outlets by pointing out their errors and biased reporting to the American people. During the 1990s, Debby also produced “The Other Side of the Story,” a weekly TV show for AIM on a Washington, DC cable TV outlet run by Paul Weyrich. Campaigns to “Impeach Dan Rather” and protests in front of The Washington Post to critique inaccurate media coverage were also part of her experience at AIM.

After joining the MCGOP in 2010, she gradually became involved, as editor of the newsletter, in writing about many of our MOCO candidates, and edited hundreds of articles, in addition to being involved in various aspects of planning and staging events for visiting authors and other GOP luminaries.

This year, the Montgomery County Republican Party is spending a great deal of time focusing on the most effective methods to showcase its candidates for 2022. After the bruising national election in 2020, it is more important than ever to try to get Republican candidates elected in Maryland. As newsletter editor and a member of the Events Committee and the Communications Committee, Debby is looking forward to helping to develop new and effective ways to raise the profile of the Montgomery County Republican Party.