Do you know who your representatives to the General Assembly are? After spending a great deal of time talking with voters in various parts of State District 14 last summer, I can tell you that almost no one I spoke with knew the answers to those questions.

Why is state government important? It is important because state government affects you more directly than the federal government does. State government determines the gas tax, sales tax, state income tax, which health insurance companies you can purchase policies from, the condition of your roads, the education system, regulations for your industries, gun regulation, election laws and much, much more. These are issues that directly affect our daily lives much more deeply than federal laws.

Each district in the state elects one senator and three delegates to represent their district in the state General Assembly. The one senator represents the whole district while the three delegates should each represent different regions of the district. But in Montgomery County where there are eight state districts, the delegates run at-large in their districts which does nothing to assure that all constituents have local representation. Adding all at-large delegates to the gerrymandering of the districts all but guarantees one party Democrat rule in each of the eight Montgomery County state districts. 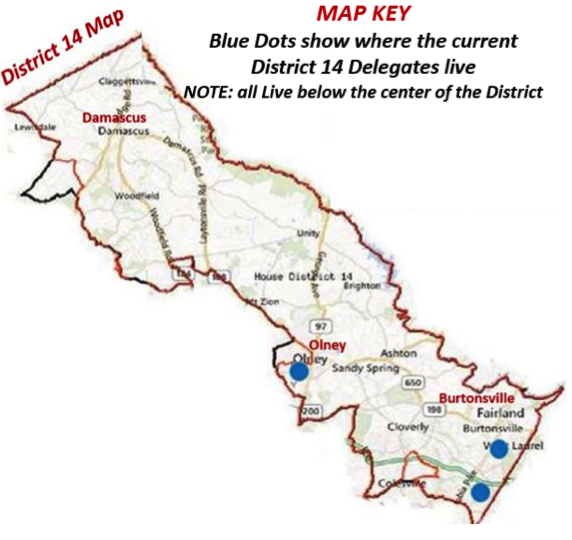 District 14 covers the whole eastern side of Montgomery County. It stretches from the Frederick County line to the Prince George’s County line and runs along the entire border between Montgomery County and Howard County. It is more than 30 miles long and about 4 miles wide. It was purposely gerrymandered that way to include voters in the more congested Democrat regions of the southern part of the district. This situation offsets the votes of the more conservative residents in the rural northern areas of the county.

Because of gerrymandering, the district is a little more than 50% Democrat. The rest of the district, for the most part, is divided between Republican and unaffiliated voters.

District 14 has the best ratio of Democrats to Republicans and unaffiliated voters. But while it would be theoretically possible to overcome the larger number of Democrats in a district, voting for delegates at-large makes it more difficult to have fair representation for diverse parties and for delegates to meet the divergent needs of the different areas of the district. However, even with these obstacles, and against all odds in the 2016 election, Republican candidates came within 43% of the votes of a Democrat candidate.

I live in Damascus. Our current delegates do not appear to care about the north county vote. On the other hand, going door to door in highly Democrat East County near the Prince George’s County last summer, most constituents I met there did not know their state delegates either… With an almost guaranteed victory, why do our delegates have to listen to any of the voters?

The Republicans in District 14 have been quite active, often conducting meetings with well-informed speakers and a yearly picnic in the summer. We started this year with a holiday party in January, which was very well attended (even though there was a major ice storm that evening.) We also had a good showing at the county convention in February. We are planning an end-of-session meeting with a member of the General Assembly sometime soon.

If you live in District 14 and would like to get involved in local politics, we have many leadership roles to fill. We especially need a district treasurer. We would like assistance in organizing meetings and events. We would also welcome anyone with organizational skills to work with their neighborhood Republicans. We will need volunteers at the polls in 2020. We have training for all these positions.

Please contact me, Pat Fenati, if you have any interest in helping, would like more information or have any ideas for better outreach to our district.