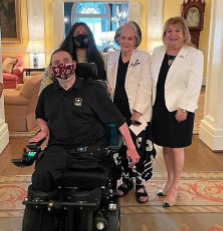 The Chevy Chase Women’s Republican Club (CCWRC) stood tall this Memorial Day!  On May 25th, the club hosted a special event at Columbia Country Club to help support the work of Patriots Point. Situated on 290 acres of Maryland’s Eastern Shore, Patriots Point is a place where our nation’s heroes are able to reconnect with their families and their caregivers. It is a safe space where our recovering military can decompress after deployment, to rejuvenate, and to heal.

Our honored guests were Captain Luis Avila, United States Army. Retired, and his wife Claudia. Captain Avila was severely wounded in Afghanistan, is continuing his healing journey as an outpatient at Walter Reed Medical Center.  Captain Avila is a hero and a warrior.  He touched our hearts when he proudly sang “God Bless America.”

His wife Claudia, is a beloved CCWRC member and spoke eloquently of the struggle the recovering warriors face daily.

Reverend Robert Buchmeier, pastor of Holy Cross Church, Garrett Park, Md. lead us in prayer. Father served as a Major in the U.S. Army and for 14 years was assigned to the Army Medical Corps.

Steve Beck the President and Executive Director of the Military Bowl Foundation, which is responsible for the operation of the Military Bowl, College football bowl game, Patriotic Point and the D.C. Touchdown Club, provided an overview of Patriot Point, and its mission.

Jayne Plank, a member of CCWRC, was honored for her longtime leadership and support in our caring for the military caregiver’s projects.  Her son Stuart is a founder of Patriot Point.

A great day and a great way to celebrate and honor our veterans.