Who Will Govern Us In Washington - You Choose

In early July, Goya Foods CEO Bob Unanue participated in President Trump’s “White House Hispanic Prosperity Initiative,” a dialogue designed to promote economic and educational opportunities for Hispanic Americans. As the largest Hispanic food manufacturer and distributor (over 4,000 employees) in the U.S., Unanue was one of many prominent Hispanic owned companies to attend this important event.  And why not, since the Trump Administration has successfully implemented economic and trade policies which, pre-Covid 19, created an environment of sustained economic growth rates and record low unemployment levels for Hispanic Americans. 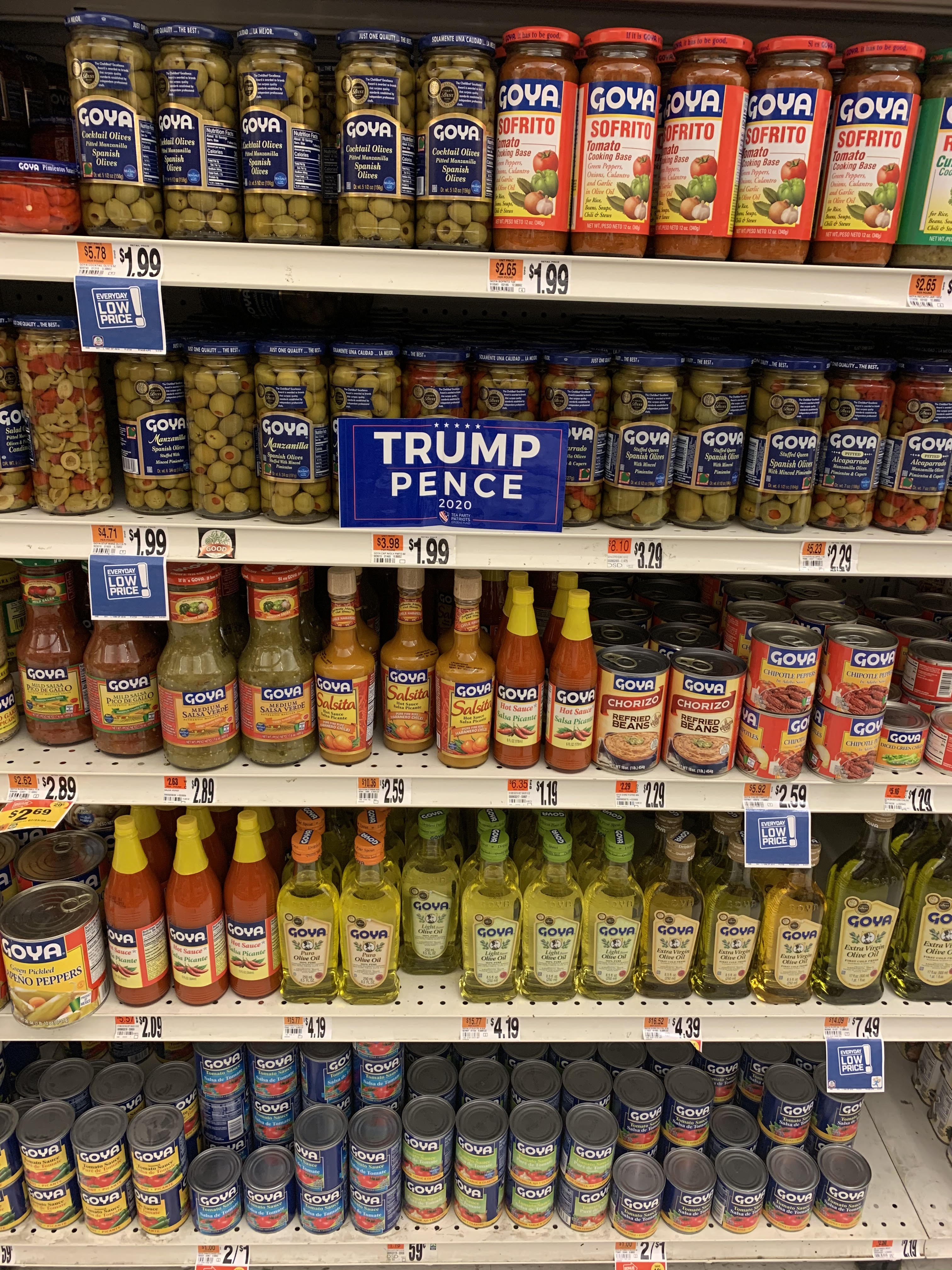 Goya CEO Unanue, born to an immigrant family originally from Spain, was so pleased with President Trump’s economic track record and leadership that he boldly announced that America was truly blessed to have Trump as our leader. Of course, that statement sent the liberal left into attack mode, with nationwide calls for an immediate boycott of all Goya products.  Even Hispanic Democrat politicians like radical Representative Alexandria Ocasio-Cortez (D-NY) and failed 2020 Presidential candidate Julian Castro (D-TX) joined the media mob demanding the destruction of Goya Foods and CEO Unanue.

However, like most things that Democrats touch and promote, the Goya boycott has been an abysmal failure in the Hispanic community and elsewhere. Moreover, CEO Unanue has refused to back down from his right to free speech and strong support of President Trump. Also, Americans, not just Hispanic Americans, are turning this mean spirited and anti-Latino exercise by the Democrats into a nonpartisan BUY-cott of Goya products.

In the local area, a GOFUNDME account started on July 11 by Casey Harper - “Buy Goya – Support Trump & Feed the Hungry” - has already raised more than $326,000 over the targeted amount of $10,000.  Goya products purchased by Harper are being distributed to food pantries in the DC-MD-VA region.

Brad Botwin is a former member of the Montgomery County Republican Central Committee and Chairman of Help Save Maryland.

Winston Churchill, speech in the House of Commons, “Demobilisation,” October 22, 1945

The tenets of Marxist revolution are alive and well in our country. The playbook is being executed with unrelenting zeal, and the Democrat party/media is orchestrating the play. The key tactics include:

Even family members and friends have become estranged along ideological lines. Virtue signaling has become nauseating.  Guilty feelings of white privilege have displaced feelings of pride in lifetime achievements.  Expectations for equal outcomes have replaced expectations for equal opportunities.  Public shaming has squashed freedom of expression.  High self-esteem as a barometer of good mental health has been superseded by self-deprecation.

All the while, the Democrat party/media has cheered these results. There can no longer be any doubt about the objective, despite the "conspiracy theory" responses. Overthrowing our Constitutional Republic form of government is front and center.  Hating everything American, including our citizens, from our colonial beginnings to the current day is now blatant and boundless.  If you don’t see this, you are not looking.

In November, we decide not just who will govern us in Washington. More importantly, we will decide how we will be governed.  The choice is clear and starkly different.

“There is never a democracy that did not commit suicide.” John Adams

This quote from one of our founding fathers seems almost clairvoyant as America and its citizens seems bound and determined to push our perceived timeless 250 year old Democracy closer and closer to collapse. The rot is spreading throughout our most revered governmental organizations. And it continues, if not actually expanding, in the face of a President that the American people expected would slow or reverse the slide into socialist septic system.

Let me demonstrate what I am talking about. Did you know that the U. S. Army maintains an Equity and Inclusion Agency? The Agency’s latest training course is “Operation Inclusion”.  Never mind that this “woke” seminar violates the prohibition against military personnel engaging in overt political activities. This training is NOT subtle, instructing US Army personnel that “voicing support for enforcement of immigration laws” or repeating phrases such as  “Make America Great Again” are evidence of “covert white supremacy”.  The list of forbidden phrases is long and pointed, declaring that you are racist if you say (or even think) “All lives matter”, if you deny the reality of “white privilege”, if you support Columbus Day, or the idea of American exceptionalism, or if you believe that there is such a thing as reverse racism.

Apparently military leadership believes that “woke” troops will make better war fighters. God forbid, they have to face an enemy with committed to training warriors to actually fight wars.

Of course this is not unique to the Defense Department. The rot runs deep and, of course, a white private diversity consultant, using his own white privilege to enrich himself has spread this garbage throughout the US government introducing far-left academic theories about white privilege into the upper reaches of a number of Federal Agencies including the Treasury Department, the Federal Reserve, the FDIC, the Consumer Financial Protection Bureau, the National Credit Union Administration, and the Office of the Comptroller. This work has actually expanded under the Trump Administration. Diversity training courses have been conducted  in the Department of Justice, the NIH, and the Office of the Attorney General.

This can only be stopped by reaffirming our American identity, by insisting that our schools, at all levels, return to our founding conviction that “all men are created equal”.  This is where we must defeat the “diversity industrial complex”.