High School Football gets the Punt by the County Council

Public high school football players, poms students and cheerleaders were upset to learn that the County Council, on March 12, decided that when they shared plans of lifting some restrictions for restaurants, businesses, and most sports, the high risk sports restrictions were not lifting. So, the word got out quickly about a protest outside the County Council building on Sunday, March 14. 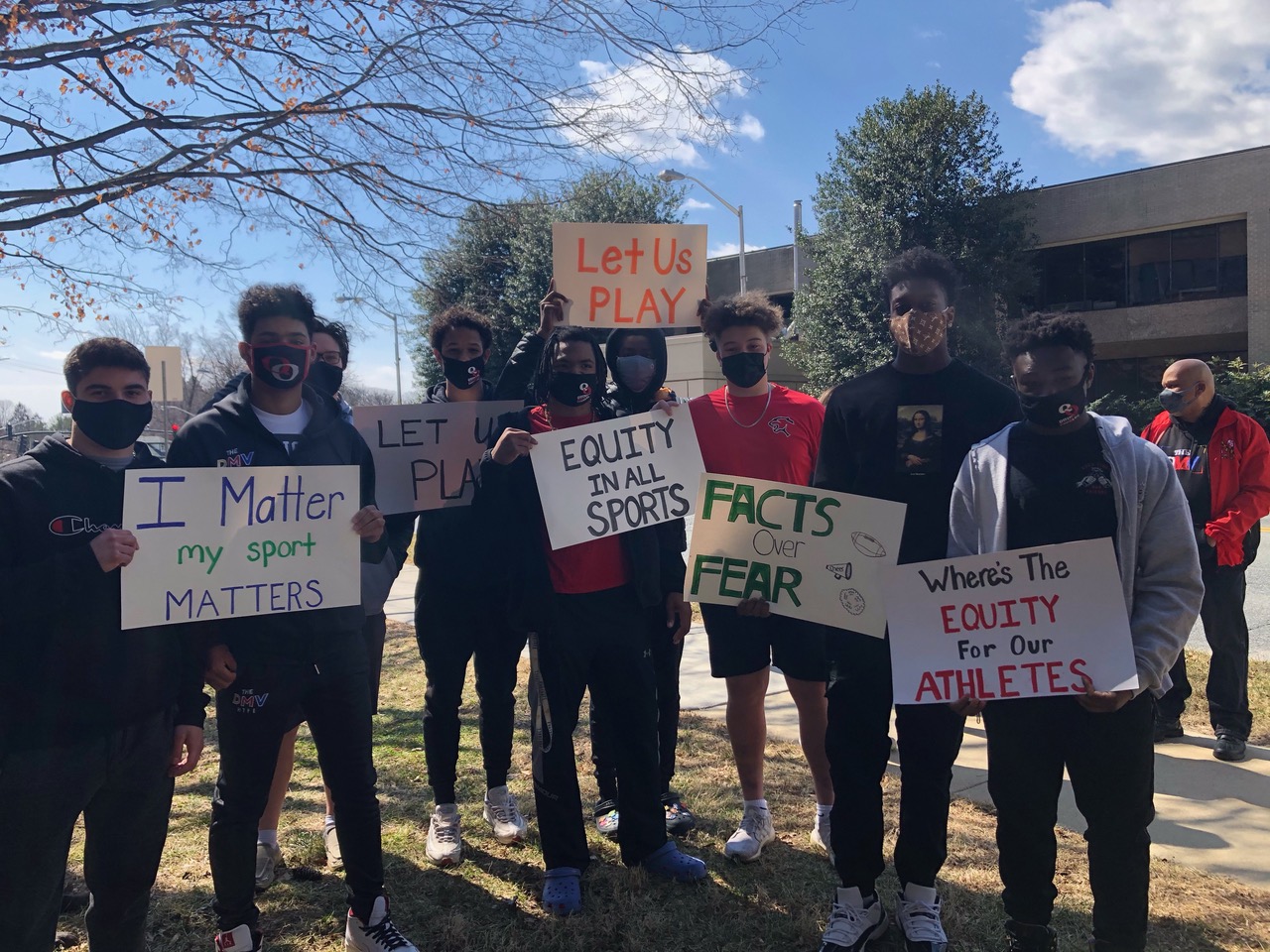 I noticed the news of the protest through the Facebook page, #TogetherAgainMCPS Neighbors for the Safe Return to Classrooms,” and decided to attend to show my support for these student athletes.

I met football players from most of the area high schools and some poms students and talked to a few parents. Last fall as it was apparent that MCPS would not have sports for the season, the best football players transferred to private schools to hopefully continue their dream to be recruited by college football scouts. One mom of a daughter in the Pom program at Northwest High School told me that each family paid an extra $700 to rent practice space at another school because Northwest was not available to them.

Equity was a theme of many signs and thoughts expressed. Not all poms parents can afford to pay the high cost of rental space for practices. Not all players can afford to transfer to private schools. While schools and sports teams across the nation and Maryland have opened up, the opportunity for an athlete to be noticed is lost for all the football players left behind at MCPS. Interesting, isn’t it, that our County Council members stress equity at every one of their meetings, but can they say they practice what they preach?

One dad, holding a sign that said “My Child’s Health is not Your Political Football” was very upset that his son was being held back from playing a game he loves. He talked about how politics gets in the way of our kids and was vocal about not wanting Marc Elrich to serve a second term.

A few news organizations covered the protest and were busy interviewing players and parents. How could the media resist. Football is an all American sport and it was under siege in Montgomery County!

A woman, not a parent, was walking around trying to motivate the protesters to actually protest. This woman was experienced-as she told me she was a protester of the Vietnam War in the late 60s and was surprised there were not more people present. “These are YOUR kids! Be upset! This isn’t fair!” are some of the things she was shouting. But her efforts did little to rouse the crowd of 100 or so. It was apparent the adult attendees were much more comfortable with Booster Club meetings. A few cheers led by a football player (an emerging leader), with the fervor you hear at a football game and some signs were what the crowd could muster. But this is grassroots…and that is how things can change here in the deep blue county of Montgomery County.

Laurie Halverson is a parent, community supporter and former candidate for the Maryland House of Delegates. She also a speaker in the April Monday's with MoCo on Charter Schools.