Maryland Commuters Are Stuck in Traffic: Which Candidates Have the Right Relief Plan?

Marylanders spend more time commuting to work than the residents of every other state, apart from New York.  The time spent stuck in I-270 or Beltway traffic is maddeningly frustrating.  Congestion results in less time spent with families and discourages workers from taking jobs involving longer commutes.

Economists estimate that congestion costs run into the billions. The statewide cost of congestion based on auto delay, truck delay and wasted fuel and emissions was estimated at $2 billion in 2015. This is an increase of 22% from the $1.7 billion estimated cost for congestion in 2013.

As serious a problem as transportation is for Marylanders, our candidates offer dramatically different solutions. 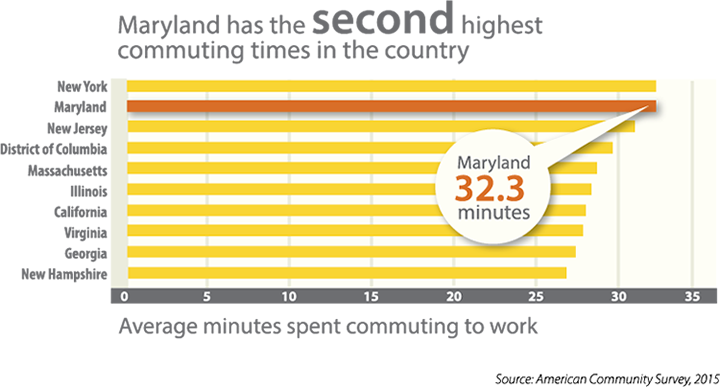 Governor Larry Hogan has proposed adding four new lanes to I-270, the Capital Beltway (I-495), and the Baltimore-Washington Parkway (MD 295), as part of a $9 billion “Traffic Relief Plan.” The Hogan approach involves using private funds to finance the expansion, through a “Public-Private Partnership (P3). The P3 would use private developers to design, build, finance, operate and maintain these new express lanes on I-495 between the American Legion Bridge and the Woodrow Wilson Bridge, on I-270 between I-495 and I-70 and on MD 295.

To be sure, the Hogan approach involves tolls to pay for the improvements. These are essentially voluntary tolls that only apply when a driver uses an express lane.  This gives drivers the option to choose to pay for faster travel, essentially when a driver’s personal “time is money” calculation warrants their doing so.

As Montgomery County Executive, Republican candidate Robin Ficker promises to partner with Governor Larry Hogan to implement the Governor’s “End Gridlock Plan."  He would also prioritize I-270 relief for the section from Montgomery Village to Clarksburg.

The Jealous approach?  He says he would “reverse Larry Hogan’s singular focus on roads” and instead spend more on mass transit. For example, he promises to use scarce state transportation funds to build Baltimore’s Red Line.  Jealous has also been critical of toll-lane expansion.

Meanwhile, Democratic Montgomery County Executive candidate Marc Elrich has been a long-time advocate of a “Bus Rapid Transit” system.  He promises to make building it, along with the Corridor Cities Transitway, his top priorities.

The major problem with the Ehrlich-Jealous mass transit approach is this:

Nearly half of Maryland’s transportation spending is devoted mass transit, even though cars account for approximately 97% of all travel. The Left tries to justify the imbalance by promising motorists that travelers will be diverted away from the roads to transit.

However, after spending billions over the past two decades on public transit, Maryland mass transit’s increase of 52,000 daily commuters has been more than offset by a 62,000 loss in carpool commuters.  In a single recent year, transit usage dropped 8% in Baltimore and 3% in the Washington metro area. In short, promised travel diversion to public transit has never materialized. Nevertheless, Maryland’s left-wing progressives are not prepared to give their public transit spending dreams.

Unlike the Hogan Traffic Plan, the Jealous- Elrich transportation approach offers very little hope that Marylanders will see improvements in their commuting times.