IT IS TIME TO VOTE THIS RACIST OUT OF OFFICE

The Montgomery County, Maryland County Council is about as liberal as you can get. And despite the claims of “We represent all of the People” and “Diversity is Our Strength” … They clearly do not represent all the people and diversity in everything, but political thought is what they really mean.

However, recent events call attention to the most racially biased member of the Council, Will Jawando. Councilmen Jawando has been an outspoken critic of the Montgomery County Police Department and has likened the Police to the “Slave Patrols” of the old South … this just to heighten the rhetoric against police when the country and the county could not be more divided on the issue. And true to the Democrat credo of never letting a crisis go to waste… Jawando has not failed to produce with this Tweet:

Now one would have to deaf, dumb, AND BLIND not to understand the circumstances the Police were faced with and the unenviable requirement to shoot and kill a 15 year old black girl. The video from the Police Body Cam tells us what we need to know about this unfortunate incident… 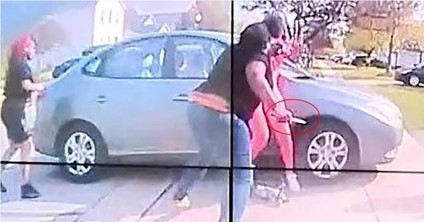 The entire world can clearly see that the victim Makiyah Bryant is about to plunge a knife into the girl in the pink suit. This is not a “Social Worker” call, or a “Slave Patrol” collecting a bounty… this is a MURDER IN PROGRESS that has been thwarted by the Police… We can see that --- WITH OUR OWN EYES --- but not Will Jawando. His racial animus and not so subtle bias is failing to serve the residence of this county. His calls to “reimagine the police leave us all less safe… and his willingness to use the death of this potential murder as a cudgel beat on the Montgomery County police has reached the point where he must be called on it.

There are many residents of this county who are frightened by this type of anti-police rhetoric. They are frightened for their families, for their property and the well being of the County.

It is time for Jawando to call off his raciest attacks on our police and start acting on behalf of the entire county. Montgomery County deserves better… and November of ’22 is just over the horizon.

Marc King is a resident of Germantown and was the Republican nominee for MD State Senate from District 15 in the last election.