From the Chairman on Memorial Day

We must come together, as Americans, to honor the men and women who died while serving in the U.S. military.

In our fast-paced life it’s important to pause and remember the sacrifices of those who’ve given their lives in defense of our freedoms, our liberties, and the right to live in the best country on earth, the United States of America.

The Republican Party was founded before the American Civil War to counter the Democrats demands to continue and expand Slavery in America. During the great conflict that followed over 600,000 troops lost their lives - as well as untold civilians. When southern black Americans were finally emancipated by the first Republican President, Abraham Lincoln and given the right to vote they registered and voted Republican - until the Democrats regained power in the South and took their rights away for decades.

The following story recalls how the black residents of Charleston gave a dignified burial to the Union Troops, honored their sacrifice and respected the memories of their fallen emancipators, years before Memorial day was proclaimed. READ THE ARTICLE HERE>

A delightful time was had by all those who were present at the PWRC New Member Tea on April 28th. This annual event had been especially missed over the past two years and it was marvelous to gather again as PWRC Member, Kate Marshall, opened her lovely home to close to 50 people. Gail Plamondon began with a moving prayer followed by Lisa Schuster leading us in the Pledge of Allegiance. The delicious mini-sandwiches, deviled eggs, spinach cakes, variety of light fare and desserts were eagerly consumed along with hot tea and coffee served in style. 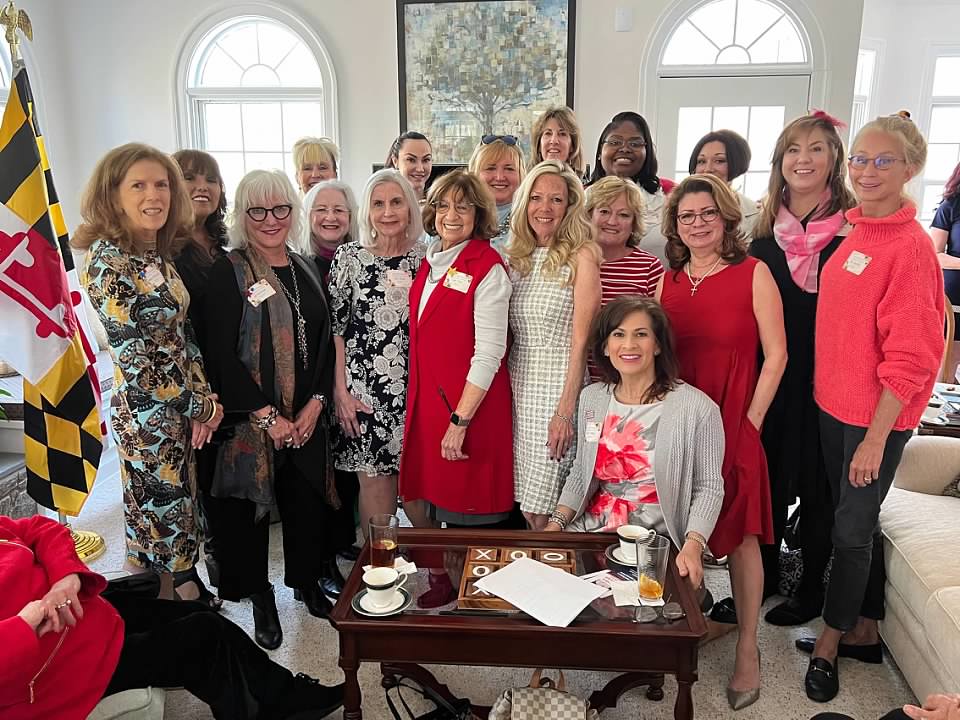 PWRC President, Jennifer Ellington, presented our most recent club award, the Maryland Shield Award and our newly elected 1st Vice President, Helene Meister, was officially introduced.  Extraordinary recognition was given to our longest running member, Jane Leeson.  Jane has been an exceptional pillar to PWRC and has remained a member for 50 years.  Jane has served in numerous board positions, club committees and as a valued mentor to countless members.

Our phenomenal speaker, Ms. Nicole Bennett spoke with great enthusiasm on "America, Strength and Civility." As the 1st Vice Chair of the Maryland GOP, Nicole inspired and entertained us with her personal stories and referenced her deep affection for our country and its flag.

Over a dozen recent new members to the club were recognized and an exciting Membership Drive was launched that afternoon.  Our fashionable group looked extra festive in their dresses, hats and smiles while many photos were captured.

We encourage Montgomery County Republican women and men to join our wonderful Club today.  We are a place where conservatives come to feel welcome here in Montgomery County.  Check us out at:  www.potomacwomensrepublicanclub.com

I am Kate Woody, the proud daughter of a decorated WWII U.S. Combat Infantry Officer. I am running for County Council 5th District. I pledge to fight to preserve personal rights and promote prosperity for all the citizens of Montgomery County. My lodestar for this task is the U.S. and Maryland Constitutions and Bills of Rights and the Bible.  I pledge to represent my constituency including those with special needs for whom I have a heart. My husband and I have a wonderful son with special needs who, in himself, contributes greatly to the County community.

I Want To Change My Party Affiliation

HOW DO I SWITCH PARTIES?

It’s a question we’re seeing more and more, especially among immigrant Americans. Folks from Africa, Asia, Europe, the Middle East and Latin America who’ve immigrated to the U.S. and become voting citizens call us often to ask about changing their affiliation.  “I came here for freedom and democracy – to escape an oppressive government…and many people seem eager to bring that type of government here!”

People who lived through the “Cultural Revolution”, government “Manifestos” in Central and South America, and controlling and dividing structures all over the world come here for the promise of freedom and liberty, yet encounter division, cancellation and tribalism. They even see the government proposing a “paused” Ministry of Truth. Add to that shortages, lockdowns, crippling inflation - and now even a shortage of baby formula. They don’t like it.

Latino Americans are one example, their overall support for the Democrats has plummeted from 75% to around 25% - rather rapidly too. They hate the term “Latinix” but it’s foisted on them as a term that’s good for them. The present administration is allowing almost an unlimited influx into their towns along the US border. And while most US Border Agents are hispanic Democrats the current Administration paints them as evil guards whipping migrants at the border, and the Press echoes those views.

Expanding the "Transgender" Agenda in Schools

Title IX is the federal law that bans sex discrimination in schools. Title IX is basically a good law, but in recent years, Leftists have politicized and weaponized Title IX.

In 2011, the Obama Administration issued a campus policy that removed numerous due process protections for students – mostly men – accused of sexual misconduct. The campus disciplinary committees – sometimes referred to as “Kangaroo Courts,” dispensed with the presumption of innocence and expelled hundreds of students. In response, numerous lawsuits were filed against colleges in Maryland and across the nation. In a majority of cases, the accused student won the lawsuit.

Now, the Biden Administration wants to issue a new regulation that will further politicize Title IX. Specifically, the plan is to expand the definition of “sex” to include “sexual orientation and gender identity.” You can imagine the chaos this will create:

Fortunately, 88 organizations, including 15 attorneys general, have called on the US Department of Education to cancel its ill-conceived plan to move ahead with this new Title IX policy. https://www.saveservices.org/2022/05/88-groups-call-on-dept-of-education-to-cancel-plans-for-new-title-ix-regulation/

If all of this seems Orwellian, it truly is.

Edward E. Bartlett, a long-time resident of Montgomery County, is the president of SAVE, a national policy organization that is working for fairness and due process in schools. Groups that wish to join the coalition to oppose the new Title IX regulation should contact him at: [email protected] 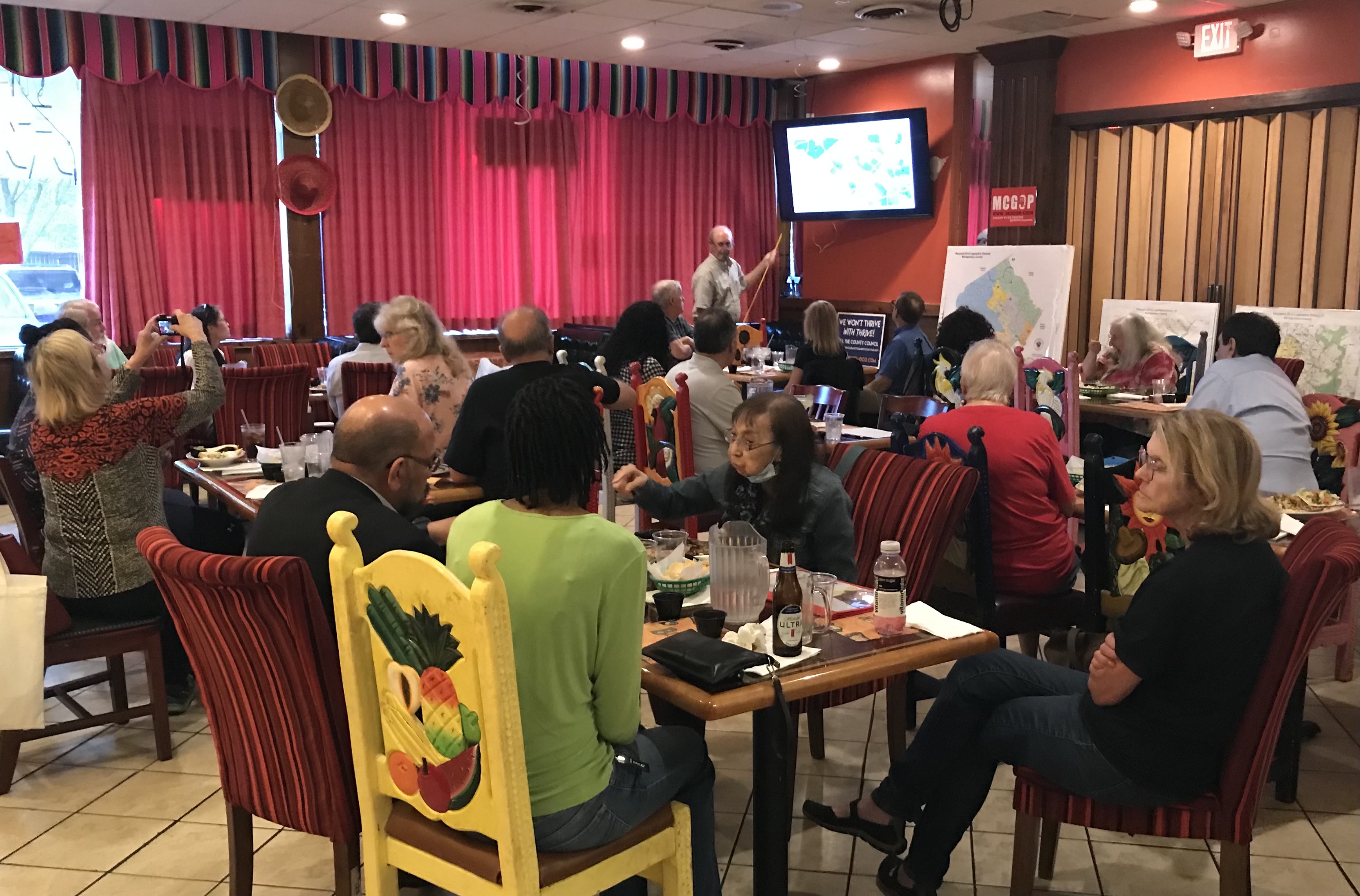 Legislative District 39 Director and Central Committee Member Greg Decker hosted information night at La Mexicana Restaurant in Gaithersburg. He introduced Republican and Board of Education candidates, showed the old and new political maps - which gave us two more Montgomery County Council Members and one extra partial State district with Delegates and a State Senator - and answered questions from the capacity crowd. This event is a monthly Third-Thursday event, not to be missed. 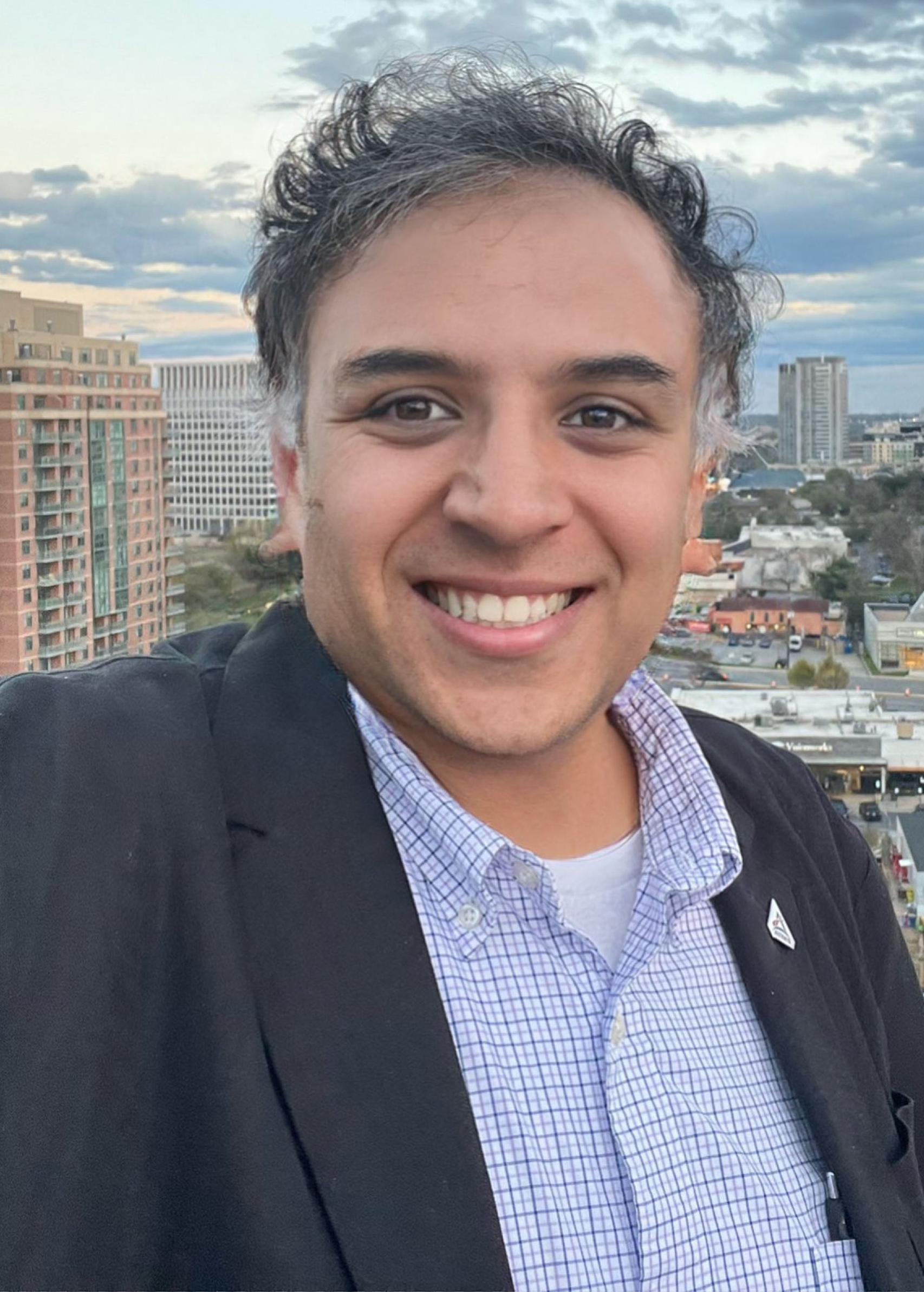 I truly believe in the American dream of pulling one’s self up by the bootstraps. I have heard too many stories within my family and outside of my family of how people came to America with little as $20.00 in their pocket, and through hard work, they achieve the American Dream.

In America, if you work hard, you can get ahead. I think the best thing the Federal, State, or local governments can do it get out of the way of the people.

I have heard too many stories from a former Iceman from Baltimore, with a 7th Grade education to immigrants who come to America with little as $20 dollars in pocket to achieving the American Dream. If your listen to the left today they’d say the “American Dream” is dead, but they are WRONG. There is ONLY an American Dream and it is alive and well. We see it when legal aliens become US Citizens, for many that is the happiest day of their lives.

This is what makes America Exceptional - anyone from anywhere can live the American Dream. Let’s face facts, there isn’t a German, French or English Dream. Its an American Dream, and it is alive and well. The progressive left fails to understand the dream. To be successful you need hard work and opportunity and too many of our policies prevent upward mobilization. Too many policies trap people to a class — keep them in a cycle of poverty and reliance on the welfare of others.

America is a lot like the proverb “…You can take a horse to the water, but you can’t make it drink…” America is the water, plenty and bountiful, but one must take a drink from America. 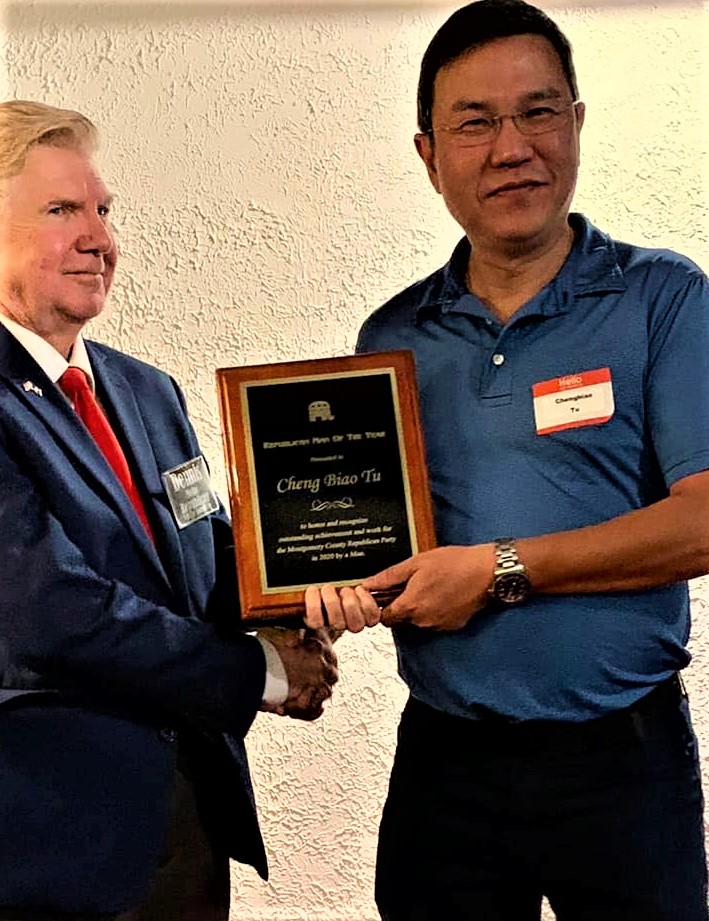 This Man of the Year award recognizes the contributions of Cheng Biao Tu to the Republican Party in Montgomery County, particularly with his contributions to the very successful  Lunar New Year dinner. His service and support of Republican values and principles has been outstanding and an inspiration to so many great Americans.

Political correctness (PC) first received widespread publicity in the media in the 1970’s when the National Organization for Women (NOW) proposed such language revisions as “chair” or “chairperson” instead of “chairman.”
The aim of the movement was to suppress thoughts or statements deemed offensive, prejudicial or stereotypical – anything that might intimidate people or make them feel uneasy. The original intent of the PC movement, being polite to others and promoting tolerance and diversity were good and honorable. Fifty-two years later the proponents of PC still argue that PC is needed to recognize tolerance and equality in a multi-cultural society.
Instead of tolerance and equality, the PC movement has created a powerful social code that members of society have to follow in order to succeed and to be approved. It is a rigid orthodoxy precludes the acceptability of an opposing opinion. Anyone who raises a contrary view must be “ignored, shunned, denounced, attacked or silenced.” PC is inconsistent with free political life. It insists on rigid ideological conformity and makes discussion of fundamental issues and thus self- government impossible by forbidding even language used to discuss good and bad. It does not give us freedom; it gives us a soul-destroying tyranny. Entrepreneur David Sacks praised the takeover of Twitter by Elon Musk, calling it a “Berlin Wall Moment.” He called it “capitalism’s self-correcting mechanism” where somebody can push back against the “galloping wave of censorship” silencing people by the simple process of “de-platforming” anyone with contrary views.
America needs a “Berlin Wall Moment.” Let’s hope the wall of censorship does begin to crack.
_____

Anne Koutsoutis is a Member and former Vice Chair of the Montgomery County, MD Republican Party Central Committee. She is also the President of the Chevy Chase Women's Republican Club.
Spread the Word!
Sign in if you'd like new recruits to be credited to you.
Share
Tweet
Email